Can I be straight with you?

Let's hope so.  I don't want my Cozy to fly crooked!
The next step is to align the canard properly so the mounting holes can be located and drilled.  This involved matching the center-line (C/L) of the canard to the C/L of the front bulkhead...which if I've done everything correct so far should actually be the C/L of the airplane.  Wouldn't that be great!


Mounting the canard to the fuselage - Alignment Pins

Yay!...I get to add the first flying surface to the fuselage.  I guess technically it would be the second since I've already fabricated the main gear fairings, which are also airfoils, but this one is more exciting.

Editorial Note:  I know some people following this don't know one part from the next and it's sometimes hard to tell what's going on in my pictures.  So, going forward, I'll try to include a small pic like the one to the right that highlights the part I'm talking about.  Hope that helps.


It's All Gotta Balance

The last part of the canard/elevator build is to install the mass balance weights.  Control surfaces have to balance properly to avoid flutter.  Airplane...and especially pilots, don't like flutter!  Here's how we prevent it.

Canard Tips...as in the tips of the canard, not hints for building.

With the elevators in place, the canard can now get tips to finish out the ends.  The plans version have a swoop up at the ends that some people don't really like.  A simpler version just rounds off the tips to blend directly into the airfoil.  Unless you do something really weird, it's really about aesthetics here and not aerodynamics.  I think the plans tips give it a little character so I kept to the plans here.

The elevators are built and assembled into one piece and now they have to be hinged to the canard.  Jigs are attached to the bottom of the canard and then the elevators are inserted into the back side of jig which forces them into a trailing edge (TE) high position of 15 degrees.  This is supposed to be the amount of throw you want to have in the down (TE up) position.

Mine were very tight inserting into the jig...so much that a jig popped off from the canard and I had to re-attach it.  Looking it over, it appeared that the TE of the canard was binding with the elevator making it too tight.  I decided to sand a bit on the TE for to give some space.  Had I looked ahead in the plans just a bit, I would have seen that it tells you that you may need to sand a bit underneath the TE to obtain the 15 degree travel.  Not seeing this yet, I sanded the back edge of the TE making it a bit shorter in chord...like .1 inch.  I wasn't too concerned about this sanding at the time because I thought there was supposed to be a gap of .2" between the top of the elevator and the canard TE according to the picture in the plans.

Fortunately, curiosity got the best of me and I did some research in the archives.  Here I found a reference to the "NEW" jigs and notes in the plans that talked about how the new jigs didn't leave a gap at all.  I had missed those notes as they weren't in the text but under one of the figures.  Oh my...did I sand too far?  I wasn't sure so I asked Marc Z. about it.  He assured me that... "If the shape of the slot is correct, the hinge point is in the right place, the Glass to Glass bond on the TE is 0.5" or more, and you can get 15 deg. of up elevator, you should be fine."...and in fact I have all those things.  Any more sanding though and I would have messed up the .5" glass-to-glass bond on the TE.  Good thing I had put in some margin.

Whew...that was close.  As it turns out...spoiler alert...when checked after the hinging was completed, I was getting exactly 15 degrees.  I could have gotten it without loosing the fractional chord length, but all's well that ends well.


With everything jigged and in proper position I could now locate and dig out the hinge slots.  This went pretty well using a Dremel tool and a routing bit.  You just have to be careful not to penetrate the glass on the other side of the canard as the hinges go almost all the way.  The plans have you install the hinges in the torque tube, fill the slot with flox 2/3 way, and rotate the hinge into the slot to cure.  I found that I couldn't rotate the hinges into the slots because the slots would need to be long enough to require digging out some of the spar cap.  I wasn't going to touch the spar cap so I just reversed the order and dropped the hinges into the slot first, then put the hinge pin through the torque tube to precisely locate them.  Worked just fine.


After the hinges cured, I broke off all the jigs so everything was free to move.  The elevators were smooth as silk and had all the required travel. 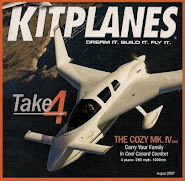